This user is banned on the Big Nate Comment Section, meaning that his/her past comments will not visible.

Is a moderate Anti-Poller who joined in the final weeks of Poll War III.

carson yt is a commenter in the comment section. He is known for getting into arguments with users and making generally rude remarks. He has a massive vocabulary like hev1. He is generally regarded as a grammar cop. The majority of BNCS dislikes him for the above reason.

At one point carson yt was banned. We are not sure why but we have some theories. He is now unbanned. He might have been banned because one of his comments got a ton of flags.

Randomly, he returned in The ComicRater Flame War from a weird banning/leave.

He once came back to GC simply to fix people's grammar which many users found to be annoying and some tried to counter him for it, he is also no longer active on Gocomics anymore.

And then he returned again. However, he did nothing but correct grammar.

He also tried to make blatantly ironic comments whenever someone told him to stop.

It is unknown if the alt he returned with is really him, however, they act the same. 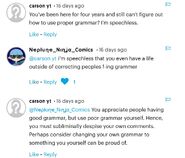 Add a photo to this gallery

Retrieved from "https://big-nate-comments.fandom.com/wiki/Profile:_carson_yt?oldid=223073"
Community content is available under CC-BY-SA unless otherwise noted.